British photographer and good friend Mandy Williams * is taking us to Paris Photo, exploring ideas of “real fictions” and unveiling some great works.

Visiting Paris Photo last Wednesday I had a short list of galleries I wanted to see. All of them had female directors, and all were showing artists who are either working beyond the flat surface of traditional photography, or exploring ideas of ‘real fictions’**.

One of these was Binôme, a gallery founded by Valérie Cazin. In Thibault Brunet’s series Typologie du Virtuel, 2014-16 he takes images of suburban buildings that have been created in 3D by Google Earth users. He personalises these images by adding a drop shadow according to the date and time of its creation and by selecting a dominant colour for each building which is ‘defined by the objective modeling filedata’. The work is stunning – his buildings seem to float half-way between reality and artifice in a world of muted colour. Brunet’s other series continue these interests, adding his voice to debates about authorship and our relationship to the virtual world.

At Melanie Rio gallery I was interested in the work of Edgar Martins. His 2010 series, ‘A Metaphysical Survey of British Dwellings’ shows the mock-up of a town created for the purposes of police and firearm training. Pizzaland was on display at Paris Photo and like others from his series appears both hyper-real and fictional. The blank facades, black skies and unpopulated streets create a sense of anxiety. This displacement, this absence of community is according to Martins ‘not just a simulacrum of contemporary British towns’ but ‘also a metaphor for the modern asocial city’.

Dinh Q. Lê’s installation, TWC in Four Moments, at Shoshana Wayne also merges reality with fiction. Dinh Q. Lê took four images of the 9/11 attack on the world trade centre that had been taken from different perspectives and digitally stretched and manipulated each photograph to become 50 metre long strips of abstract colour. Knowing their original source, it was emotional to see the long colour strips falling to the ground. Inevitably memories of that event are revisited, adding layers and complexity to the abstracted images. 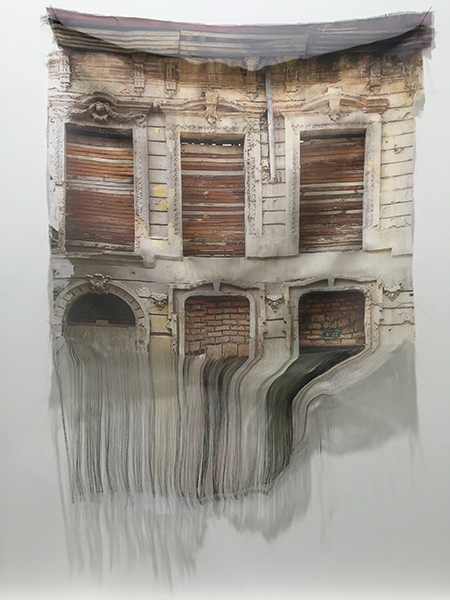 Leyla Cardenas, showing at Galerie Dix9 Hélène Lacharmoise, explores urban ruins and city landscapes as indications of social transformation, loss and historical memory.  In “Contained Entropy”, her image of the building is mounted on demolition debris, through an extension of the image. In “Unshrouded #3” a photo showing the facade of an old building in Bogotá, is printed on fabric that she uncovers at one end. She has used fabric and thread in her work for a long time and felt it was logical to start working with veils, ‘that are like phantoms, the last fragile image of places that are about to disappear and dissolve’.

Another artist using thread is Iris Hutegger at Esther Woerdehoff gallery, who applies drawing and stitching to her landscape photographs. The stitching is integrated smoothly into the surface using a machine she helped develop and the textural interventions are only visible up-close; from a distance the work appears as a single photograph. Her locations are deliberately unpopulated and place-specific references are limited. By choosing titles with numeric codes she keeps these places private and mysterious. 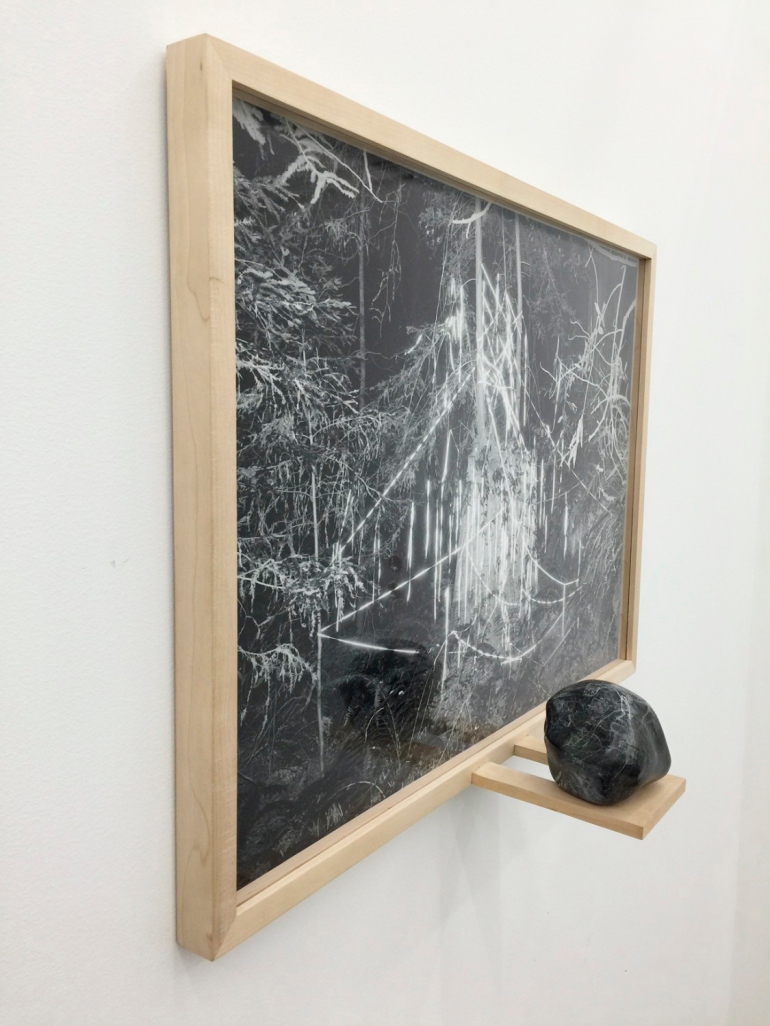 At Grundemark Nilsson gallery, I liked the Pentagram Position series and Becoming Wilderness series by Inka and Niclas, especially Pentagram Position XV (2014/2016), where the photographic image has been transferred onto a stone installed in front of the photograph – it was mysterious and compelling. Their work is not about place in a literal sense; as Niclas has said, it is ‘primarily concerned with the psychology around nature and photography.’ They work intuitively – much of it is “based on simple actions, throwing powder into the wind, building a sculpture out of branches (as the case in Becoming Wilderness X) or by light briefly colouring some rocks’.  They see these actions that ultimately lead up to a photograph as ‘performances done in alliance with the landscape, the elements and the camera.’

At Les Filles du Calvaire I was interested in Katrien De Blauwer’s work and was lucky to talk a little with her at Paris Photo. Katrien has been making her cuts for more than twenty five years, but only started to show them about four years ago. Her source material is mainly magazines from the 1930s-60s; most images feature women suggesting an element of autobiography. She has said, ‘My work contains hidden layers, parts of me (or my past) in the work’. She works quickly and instinctively and says ‘repetition and rhythm is important in my work, in the creation itself, and also in the results.’  These small images possess a vivid cinematic quality, a mysterious voyeurism, but also a genuine emotional impact through her skilful cutting and layering.

* Mandy Williams is a London-based artist working with photography and video.  She is interested in new approaches to landscape photography and the psychology of place. In her recent work she has documented environmental issues (Riverbed Stories) and created semi-fictional landscapes using Google Street View (Unseen Landscapes). She regularly exhibits her work and has been recently published in #Photography, KALTBLUT Magazine, Another Place Magazine and Plateform Magazine. www.mandywilliams.com