Who could have known? How could such a time-space wrapping happen? That a small conversation with an unknown client in a London Wetherspoon pub would take me home? Really home, in Normandy, in that part of Northern Cotentin where I am from and where I go back to from time to time to visit my parents. More than a geographical home, it also took me back to memories I had radically left behind. 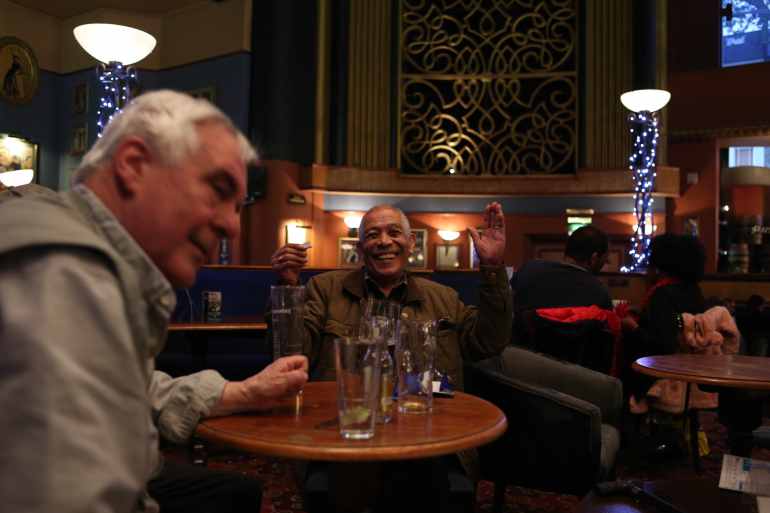 The question is common. It often annoys me as I struggle to fight its banality. “Where do you come from?” As I answered Normandy, the man I talked to in the middle of the Coronet pub in north London, insisted he knew Normandy very well. “ I have lived there. I have a house over there. In Les Perques, not far from Cherbourg.” I was taken aback. Les Perques is a tiny village nearby where I grew up. To me, it is more a name than an actual geography, as I do not think I went often there. Though, when I was at secondary school, I remember that the pupils coming from there stood always aside. They were dressed differently, they kept to themselves. Nasty jokes were thrown at them. Back in the 80’s, it had the reputation to be fairly backward, little farms scattered around, old style living. Away from major roads, Les Perques stood on a little hill and formed a sort of enclave. I was to know that nothing had changed much since then.

The man was unstoppable. “I have that castle over there. It was built in the XVI century. But I do not go there anymore. I have not been for more than 20 years. I owe them money, you see. I have not paid my taxes.” For some reason, I never thought he was lying. Mentioning such a remote place seemed a proof in itself of the veracity of his story. “ The mansion has even heraldic stone carving above the door. There is a massive vaulted entrance you can see from the road. L’Eperney, it’s called L’Eperney.” As if he was anticipating my perplexity, he kept adding more details. “Since my divorce, I have not been there. They are after me, I owe them a lot of money. But I did not feel like going back, too many memories.”

I was intrigued. “It must be crumbling down. I don’t know what is happening with the house. I can’t go back, it’s too much money. May be the tax man has taken it back…” He did not know the state of it, if it was now a ruin, if anyone was squatting it. I told him my mother knew the area and I could ask her. He left me his phone number and I sort of promised to let him know. I am not sure if it was of interest to him. It seems like an old story he was repeating often, a past he was detached from. The word Normandy seemed to have triggered it. I kept thinking about his manor. For some reasons, I had visions of abandoned castle in the midst of nature. I always remember the scene in Le Grand Meaulnes, that XX century cult French novel, by Alain Fournier, when the narrator discovers a castle after loosing his path in a forest. Night had fallen, the castle is illuminated, there is a huge dressed up party on the grounds. He does not know anyone. As in fairytales, he meets a young girl and falls in love with her. Later on, when he wants to return to the castle, he understands it is impossible to find it again. He never really understood if he had dreamt or how much reality the night party had. The love he still felt was real thought. The whole book plays with the limits between dream and reality and seems to be wrapped in a memory haze. I have this same memory haze about discovering hidden places. With time, they have become narratives of their own. Such as the day, after a long walk in the Marly forest with my sister, when, to my insistence, we broke in to get close to the tower of the Désert de Retz. It had that mix of anticipation and fear, for most of those places are private property and are protected from intrusions.

I lost his phone number. But when I spoke to my mother over the phone, I mentioned the story. Did she know the place? “Oh yes, the last time I went to the Manoir, his neighbour, an old woman in her 90’s complained she could not work in her garden as the roof plates were falling down. It’s a ruin. Nothing is left.” I could not get more information from her, and intriguingly she did not ask how I could have heard of the Les Perques’ manor in London.

I went to Normandy in August. I had just finished writing an article on Cecil Beaton and his English countryside houses. There, is in his memoir, Ashcombe: The Story of a Fifteen-Year Lease, published in 1949, the photographer and decorator recalls his discovery of Ashcombe manor in the Wiltshire countryside while on a walk. The manor is partly abandoned and he falls in love immediately with the place, renting it for the following 15 years. Ashcombe became the arcadian decor to stage and photograph the intelligentsia and artists of the time in meticulous bucolic settings. While in Normandy, I embarked my brother and his two children to look for the abandoned manor of Les Perques. I had researched the map before hand and had read about the manor, it had been built at the same time as the medieval castle of Bricquebec, where my parents live.

The road to Les Perques left the national road and took us high up a hill. I remembered a café-épicerie from the internet research so we drove around looking for it. There was no café. The village with 156 inhabitants is one of the most spread ones in Cotentin, it stretches along narrow roads with high green hedges. Several times, the tiny roads led us to an earth track. The roads went nowhere, they just stopped and became beaten tracks for tractors. It formed a sort of enclave, with scattered farms and old country houses which for most of them had been renovated. The hamlets bears intriguing names such as la Vallée des loups, la Grotterie, Hameau du Paradis and is entrapped in a green lushly halo. We were looking for L’Eperney manor, but none of the roads we took seemed to lead there. At some point, we passed a sign pointing to Le manoir, which led us to a modern 60’s house surrounded by an exuberant display of geraniums. A man in green overalls looked at us as  we reverse in his house court yard. Jokingly, my brother pointed at him, “And he must be the lord of the manor.” I thought we could get information at the town hall, but it was closed. Luckily, the post woman had just stopped there, so I went to ask her about L’Eperney. “The manor, it’s just there.” She meant the place we had just been too. I told her about an abandoned estate. “But the manor is not abandoned,” she answered with a quizzical look.

We drove back to where she had pointed and engaged the car in a narrow slope leading to a medieval farm building, a throw from the modern house. The man my brother had joked about turned up. He was the seigneur du manoir!  And he was used to see people turning up on his land, but he had nothing to do with L’Eperney, which was further down the road, on the outskirts of the village. I asked him about the story I had been told. “L’Anglais!!! Yes, I know him. We have not seen him for years. He owes money to the town hall for local tax. Quite a lot.” The man was talkative, amused. Middle age, with those blue eyes common to the Norman region, and divorced as he quickly underlined it. He wore the kaki traditional farmers’ two zip overalls and leaned to my open car window. “We even gave him money to get back to England. Money to buy his ferry ticket. Some of his neighbours even fed him, he was totally broke. The last time we saw him, the mayor drove him back to Cherbourg.” The story seemed to entertain him, “we have several English here. Ah, les Anglais. Another one bought a piece of land, and left several caravans on it. We can’t get in touch with him. I know all, as I am a village counsellor. That one went to prison. And now we do not know what to do with his caravans…” He told us he had bought a new dog to prevent intrusions by visitors. “The older dog is useless, he does not bark.” I had read about the existence of a tunnel between Les Perques manor and the medieval castle in Bricquebec, and of a treasure buried in it. “I see all sort turning up here. One day, there was a long haired bloke with a metal detector in my court yard. I have nothing against long hair but they just trespass and go where they want.” The treasure seemed such a strange addition to the manor quest. “ I looked for it a lot when I was a kid, with my father. The entrance of the tunnel is supposed to be on my estate.” Pointing to the old farm building, he added, “we found a vaulted underground room, but not the entrance of the tunnel. The treasure was buried during the revolution. The previous priest had a whole archive about it.” He was enthusiastic, “ It is said that there is a ton of gold….” When we drove back, my brother confirmed the rumour and told me his teenage friend’s parents, who also own a manor close by, had been looking for the treasure too. And the entrance of the tunnel.

I thought of the modern technology available, and of reading of those XVII century sunk ships recently discovered in the Atlantic. They too had huge amount of gold.

The search for le manoir de l’Anglais was still on….