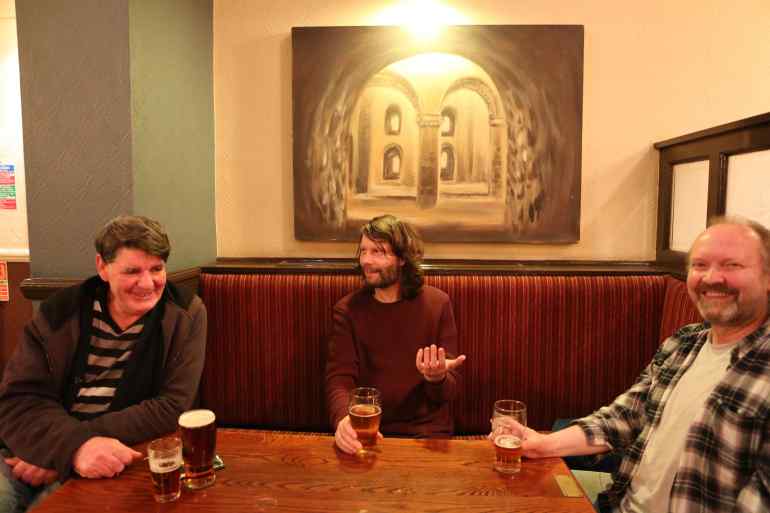 The plan had been fixed. We would sleep at my house in Stoke Newington and take a taxi at dawn the following morning to Stansted airport. Elisabeth and I, since the previous summer had been regularly going to Serbia. A year ago, we had covered for the press the birth of the latest micro nation, Liberland, on the Danube banks, between Serbia and Croatia. So we could hang around at night in another Wetherspoon close to home. 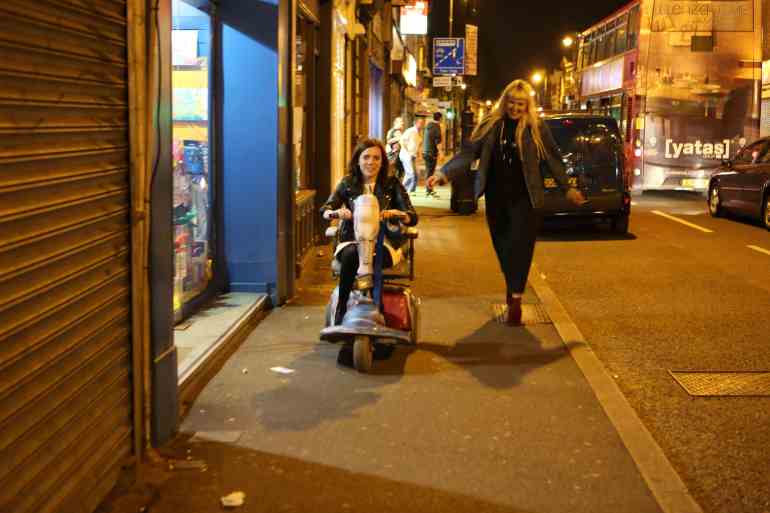 The Rochester Castle is not so easy to spot while walking on the High Street. Even though it bears two massive columns at its front. Twice, when we were heading there, I nearly missed it. A repetitive pattern, I always remember that I am close to it when I spot the petshop which is a few meters away. Outside, a bunch of youngsters were smoking and laughing. When we passed them, pushing the entrance door, they hardly moved out of the way. As for a lot of Wetherspoon, the Rochester Castle does not have any seducing interior features. It feels banal and devoided of asperities, creamy colors and wooden tables, with some leather sofas scattered around. Having read about it online, I learned that it dated back from the 80’s when the chain took over from an older pub. The first impression, though is mainly limited to the first entrance room. The layout is peculiar, it reminded me of a big hallway, or a very wide corridor, through which people keep passing back and forth. It has a complexed stratified logic, spreading along 3 massive rooms, separated with partitions in the middle. Each of the three had a very distinct feel, hosting very different drinkers.

The first is the most anonymous, with a lof of men eating diner on their own, staring away while eating, or quietly reading with the plate left empty in front of them. They display a sense of ease with the place and its pace. They seem to have taken a sort of residence, bringing a sense of familiarity and homeliness to the space. The second room, darker and more secluded offered several wooden compartiments along its two opposite walls. Some were inoccupied, while the others had groups of men lost in intense discussions. As for the third, it is a sort of conservatory over lit with an aggressive white light, but it was the most fascinating part of the pub.

Earlier on, I had spotted some characters waiting at the bar then heading towards the back of the pub, beers in hand. Young students, in their 20s dressed in amazing colourful vintage shirts, tight jeans, and for most of them, slim leather shoes. Most of them had long hairs, shoulder lenghts, or the odd bob.

Their faces, as if aligned on the era they had elected, were also slightly out of step with the XXI century. Or it might also just have been a side effect of the radically outdated clothes they were wearing. All the girls had very long straight hair, some wearing also full colored printed clothes. One girl, lean and blond, had an electric blue one piece combinaison, as it was popular in the 70s. 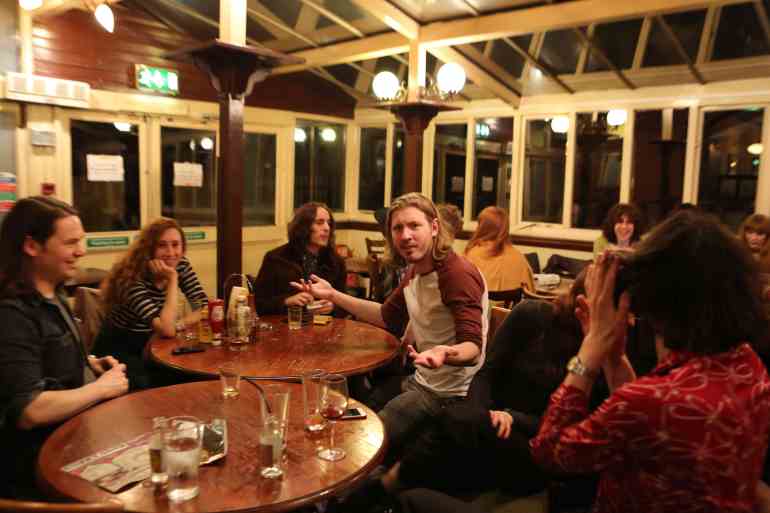 They reminded me of the early 80s in Normandy, where some people still wore the trends of the previous decade. More so, they reminded me of my Lycée friends at the time, with their long unkept hair and hippish looks. We sat on the periphery of the group which had invaded several tables and spread in most of the conservatory, some permanently on the move from one table to another for a chat. They remained totally and constantly unaware of our presence. Their seclusion was so strong and so constant, it felt as if a glass partition was cutting them off from the rest of the place.

Their presence had something fascinating. The distance they kept with the other drinkers seemed to project them in a different space. At some point, an old tall man, holding a blue plastic bag came to sit near them. They never glanced in his direction. They did not noticed him whereas his eyes obsessively stuck on the young girls. While looking at him lost in his contemplation, a shiver ran through me, there was such as predatory stare in his blue sunk eyes. Stiff, alone and still, he remained for a while looking at them, before disappearing as he had come. The group reminded me of a book from Bioy Casares, The Invention of Morel. I had some years ago seen a film adaptation of the novel which also stuck to my memory. The story, dream like, is set on a deserted island where the narrator, a fugitive, hides. He rapidly spots a group of tourists who settle in the hotel at the center of the island. He quickly realises that they cannot see him, as they are a projection from the past, repeating endlessly the same conversations and movements. Ghosts with presence, they are unaware they have been trapped in a repetitive loop of time. In a way, there was something cinematic into witnessing their hedonist and recklessness lives. It is only when we started photographying them that they became aware of us. Even their reaction was distanced and cool. As if it took time to register our presence, to shift to the different dynamic we had around us. And even shot at, they just avoided the lense by turning their backs away from the camera, still moving with grace. As if reluctantly awaken from a collective drunken dream. There was no way to break through the glass wall, so we moved on.

Back in the middle room, I started noticing various details not spotted previously. A portrait, one of those conspicous nobility ones, but the brush stroke were reduced to the minimum, leaving a feeling of an unfinished piece. The silent TV which was relaying a Brexit public discussion. And for each alcove, the display of local history, adorned with copies of vintage photographs of the area accompanied by texts reminding the drinkers of the local history of Stoke Newington.

Marc Bolan Edgar Allan Poe, the Angry Brigade had all lived in Stoke Newington, a stone throw from the pub. One table was more animated that the others, and I had early on been interested by the few persons gathered around a central young man who seemed to be at the heart of the conversation. By the time we sat near their table, it was fairly late and the alcohol had eased their confidence, as we were immediately invited to join them. A few of them were in a folk band we were told, and they wanted to have a gig in Paris at the Lapin Agile, which in Montmartre, used be to be a known artist hang out, where writers, painters and musicians, such as Erik Satie who they mentioned a lot, were gathering.

The coincidence was interesting, I had just read Cendrars, The Transsiberian prose, the long poem he wrote at 16 while travelling as a jeweller apprentice on the newly achieved train line linking Moscow to Vladivostock. In the poem, Cendrars refers to his lover, a yound prostitute named Jeanne who he had met at the café. The strong connexion of cafés, drinking den, alcohol and bohemian life was still operating, late at night, in a corner of a pub. They told us they were meeting very often at the Rochester, Dylan, the younger one, Jeff, a painter about whom it was difficult to understand if his painting was decorative or artistic, another member of the band, and a sulken man who did not say much. Dylan hold that specific knowledge about France I have often found with some British people, he was unstoppable on Huysmans, Facteur Cheval, and Satie. The talk was messy and lively, and warm and interrupted by the continuous invitation of Jeff offering to cook at my place a huge meal for all of us. Eventually, we were the only left in the place and nicely but firmly asked to leave. Outside, on the High Street, people were everywhere, buses were speeding, pubs were emptying. The night was short before we had to wake up at dawn to fly to Croatia.